Most of our dives are  around the San Andres Island. The Island has more than 10 hectares submerged at only 800 meters from the Carboneras´s coast line. Out of the Island there are also several dive spots along Cabo de Gata natural park.

During the 19 years diving in this area, we know the sites as our own home. Down below you can read about some of the dives you may do while visiting us. 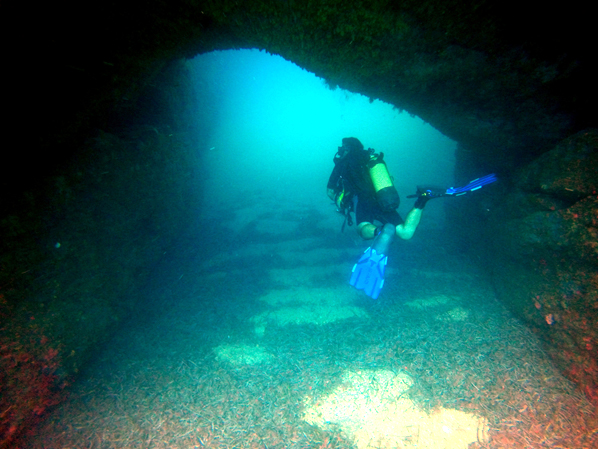 This dive spot is a submerge montain located in the west side of the San Andres Island. The minimun depth is 5 meters and from there we can go down the sheds untill 30 meters. In the middle of the montain there is a 20 meters of diameter hole which looks like a volcano´s crater. During the dive we will enjoy seeing walls ful of invertebrates as nudibranchs, anemones and many others. The slots are colonized by groopers, moreys, octopus, congers...and looking to the deep blue, we find big schools of fishes always followed by predators as barracudas, dentix, jack... 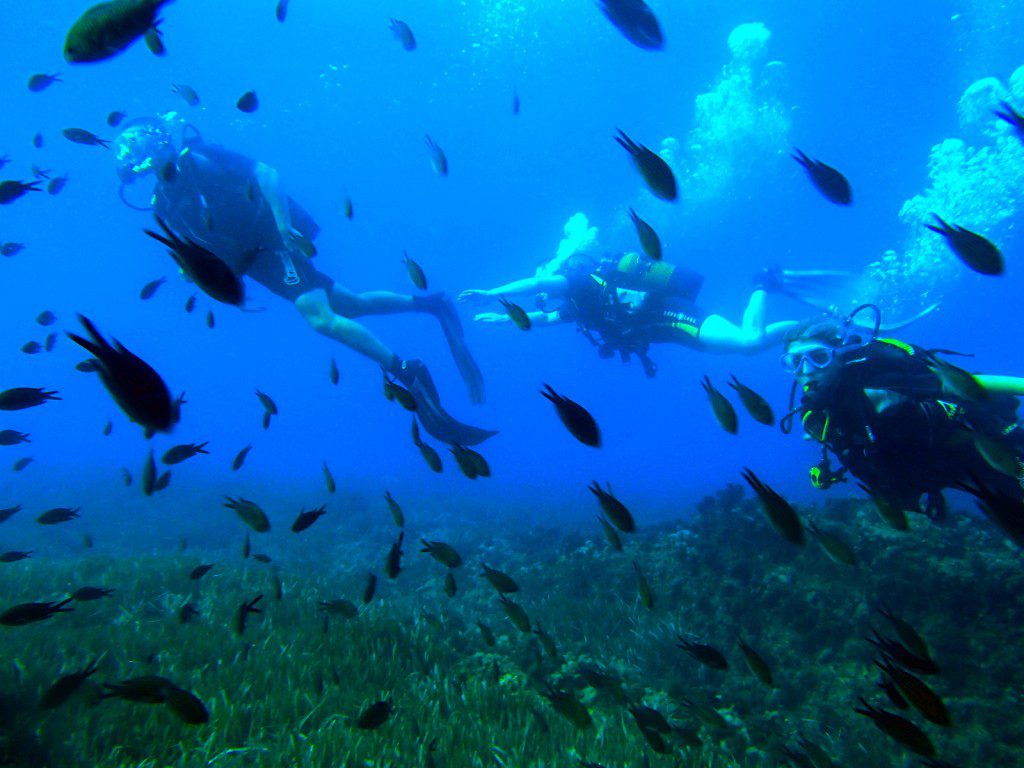 This area includes a wide extension of the submerge island, so there are many options and routes for this dive. This spot is specially spectacular when wheather conditions keep the visivility stable. Looking arround, you will get involved in a very active underwater world. Lots of small fishes makes big schools of fishes, and arround them lots of predators swim fast trying to cach any of the small ones. Many times we stay motionless laying on our knees to see this amazing show. Barracudas, dentix, jacks, fishbase... We start from a big sandy square from which comes out lots of canyons to follow. The widest one is also de largest one, going from 8 meters down untill 18 meters. It is situated in between 2 montains. On the shallow area we have a pristine posidonia field. Going deeper we find espectacular volcanic landscapes and again, lots of helthy mediterranean species. At this spot, on 2010 we also found a Tourtle. 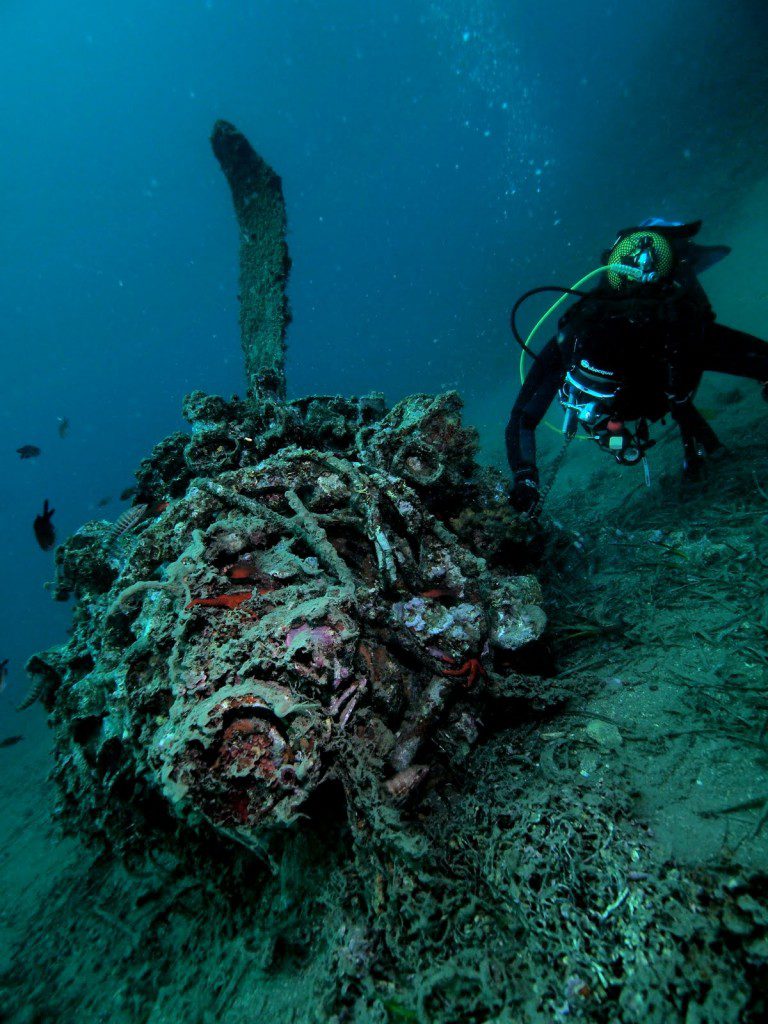 This is one of the most popular dives of the Island. While doing this dive we find an engine of a second world war British bombarder. Going form the fardest side of the “Crater de San Andres” and lookig to the deep blue, sadenly it apears as a gost. Their remains give shelter to moray eels, scorpion fish, numerous nudibranchs, planarians, spirographs... The Engine is one of the deepest dives of the San Andres Island. If you are still and Open Water diver, it would be a great option for you to think about doing your Advanced Open Water diver course and visit the Engine dive spot during your deep dive. 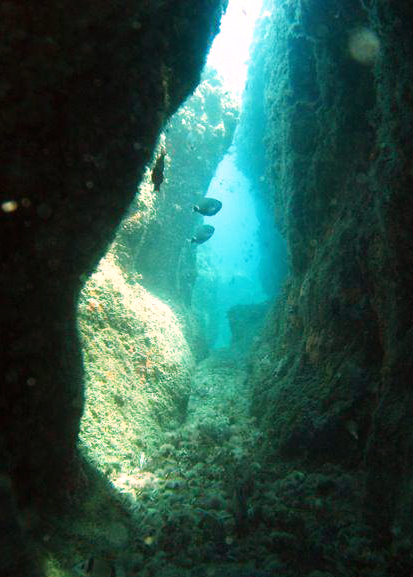 This site is completely sheltered by the San Andres Island. It can be done even when weather conditions are to difficult to dive anywhere else. The wall is fully covered with anemones, sea stars, spirographs and nudibranchs. Deeper we have pristine posidonia fields full of breastplates, torpedoes and many other species alternate with sandy bottom ,where wrasses build nests, cuttlefish move arround and sea eagles dance peacely. Depending on the season we'll see parades of diferent life: fry shoals of breams, barracudas, bows hunting, bullet tuna, snapper, bream, salps, dentex... 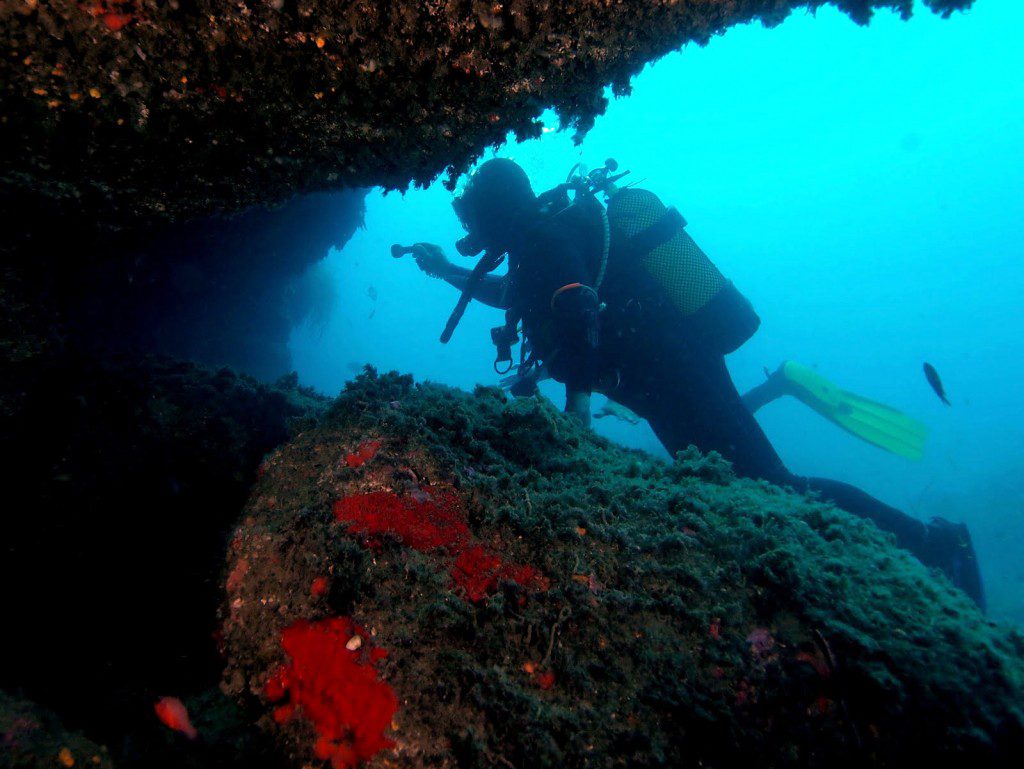 As you may imagine, this spot is full of drums. There is a tongue of sand which is 17 meters depth. This tongue is dug in between the posidonia field. On both sides rise two walls with many cavities and cracks on them. There we find big schools of drums fish and many other species such as conger eels, moray eels, groupers...also, outside the caves during warm seasons, it is full of mullets, barracudas, dentex, triggerfishes and even moon fishes. 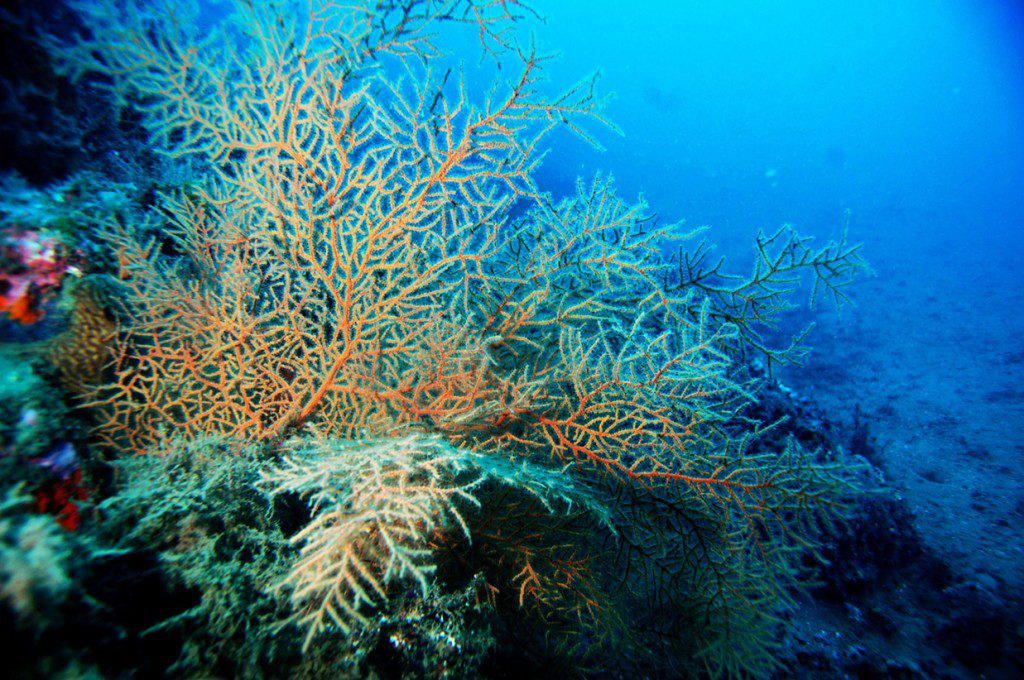 They are located on the west side of the Crater (dive spot explained avobe). There is a wall going from 5meters down to 30 meters, and on the last 15 meters we have some diferent species of gorgonians. They are colonial organisms formed by polyps. They may reach large sizes and being growing for decades. We need to be very concern not tu damage them while diving. While looking closely, we find many invertebrates as anemones and nudibranch among the gorgonians. As we go deeper we find species dificult to find on shallow waters. During the dive, we would also enjoy the company of castanets, bream, salps, barracudas... and the rock cracks are filled by large conger eels, moray eels and octopus. 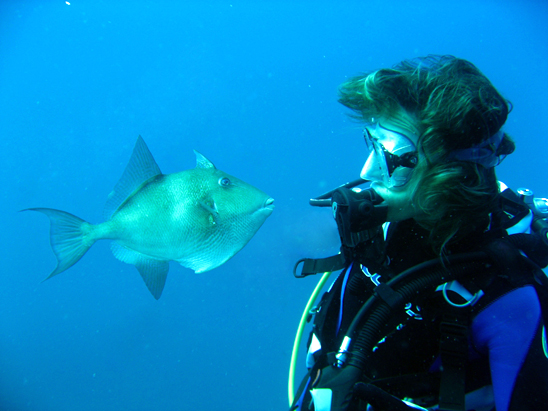 This dive spot is the most exposed to the open sea on the San Andres Island. Going from 5 meters of posidonia fiels we start going down to 30 meters. There are many ways to do this dive, but the most spectacular one is dive down a wall cut to have the felling of flying on the water. The fauna is quite varied. On one hand we have schools of castanets, salps, fish, bows, some dentex, mullets and fake pollack a long the posidonia fields, and cuttlefish, sea eagles, octopus, ,moon fishes, barracudas, anemones, nudibranchs, sandy stars, polychaetes and other invertebrates if we scroll carefully the sandy bottom. 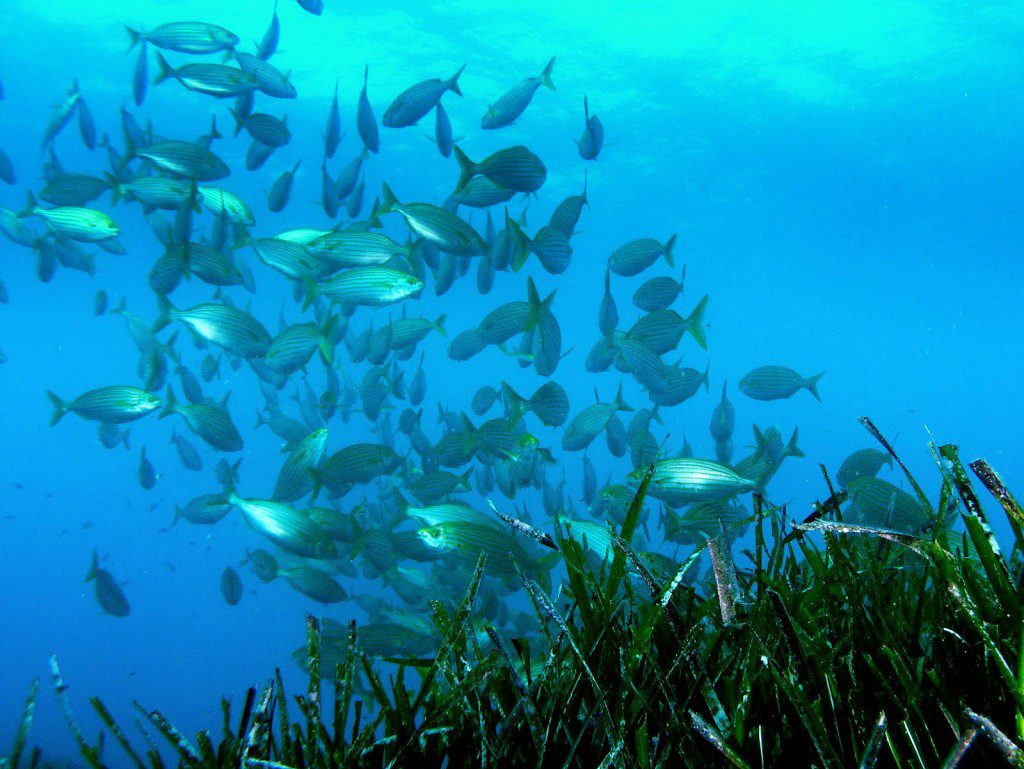 They are located on the side of the Islan which is closer to the beach. This spot is characterised by its landscape with rock inbounds and outbounds forming beautiful corridors which are full of little caves and cracks. It is a spot of great beauty and simplicity, full of light and life. It ideal for all levels. The rocks are covered with colorful invertebrates: sponges, sea stars, spirographs... and its cracks give hideaway to many species as groupers, rock fish, drums fish. At the end of the canions there is an 8m platform full of little canions and diferent rock shapes. They are full of life inside and outside swiming arround. 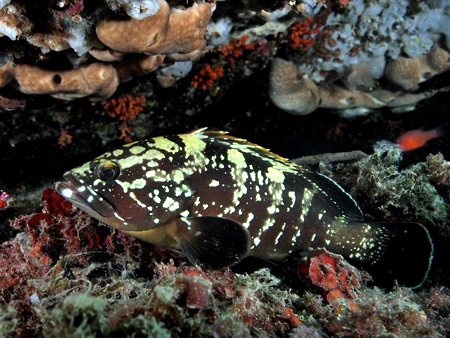 This site is located on Agua Amarga´s Bay (arround 25min sailing from Carboneras). In the midd le of a big Posidonia´s field there is a 1 meter high and 140 square metres wide rock called “ la roca de Blas”. Going down the anchore line, suddenly we start to see the rock and it gets bigger as we get closer. On the cracks and little caves use to live moorey eels, congers, groopers, fake pollacks...and it is also a place for invertebrates such as the peculiar Bonellia viridis whose retractable fallopian goes from one side to another of the caves and cracks settling them down also on the sand. Looking to the big blue we will be surounded by schools of fishes. Depending on the season it is easy to see triggerfish, and moon fishes. 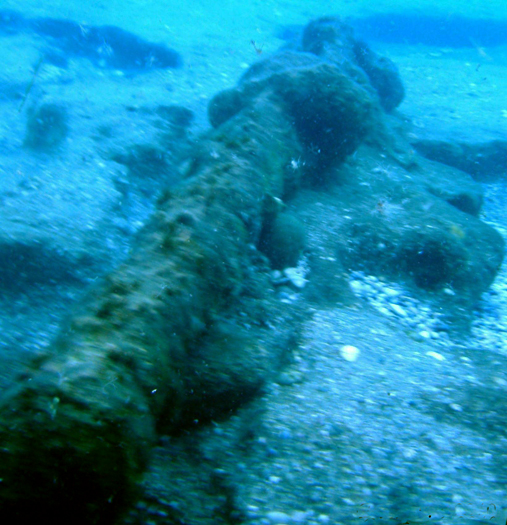 This site is located in the Cabo de Gata marine reserve. Usually we acces to this spot from a beach called el Corral. It´s underwater landscape is full of corridors created by rocks that fell down the cliffs long ago. The walls are full of multicolor invertebrates and also many mediterranean species swiming arround on the open waters. Don´t forget to look on the sandy bottom because it is usual to find some ray hidding or playing arround. This spot has special interest for archaeology lovers. If you look carefully you may find some fire canions (there are 5) or their ammunition. 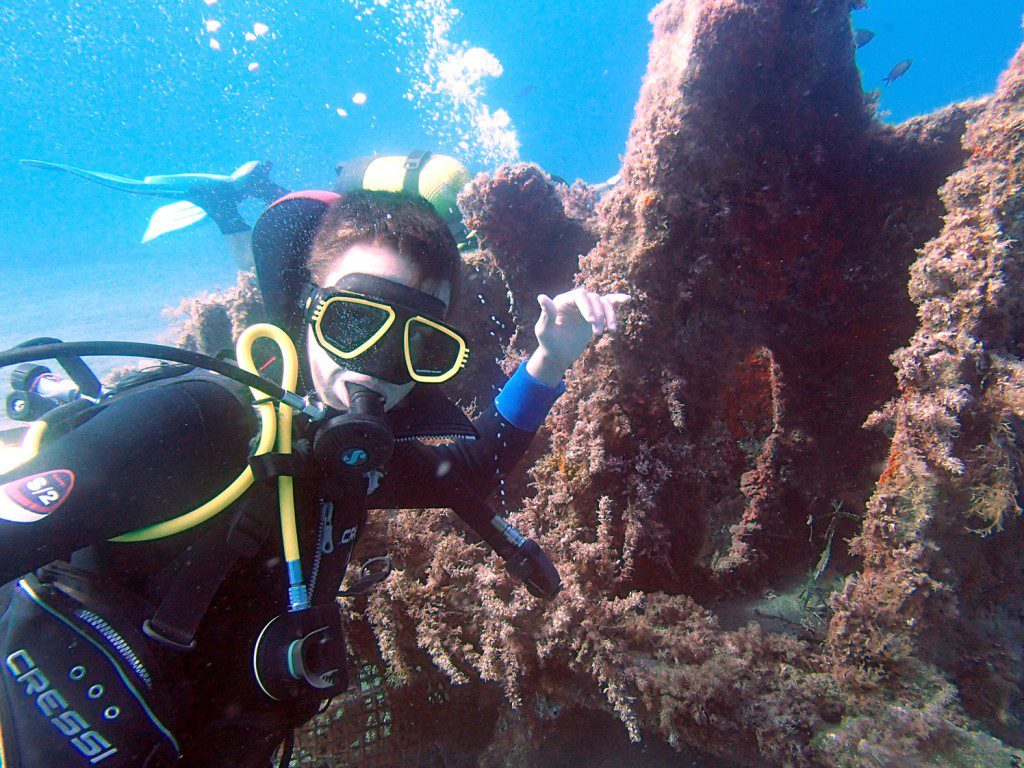 On the 12th of April, 1927 a hurricane arrived to the almería´s coast causing a multitude of wreckship. One of the boats affected was "la Choncholita". She was a steam boat dedicated to carrying esparto grass and now sinked beside the Carboneras´s Harbour. Over the years the sediments have been covering she, but there are still visible a good part of the ribs, the hull and the boiler. This is a great spot for free diving with good sea conditions. Perfect for practice some photografy and look arround. The remains of the boat are fully covered with algae and invertebrates, and give shelter to small groopers, fake pollack, cuttlefish, octopus... and many other fishes that browse around. 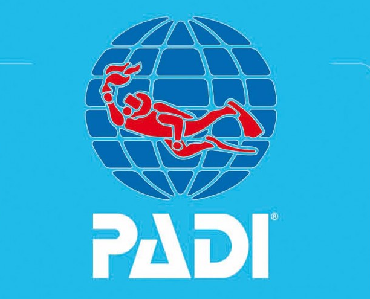